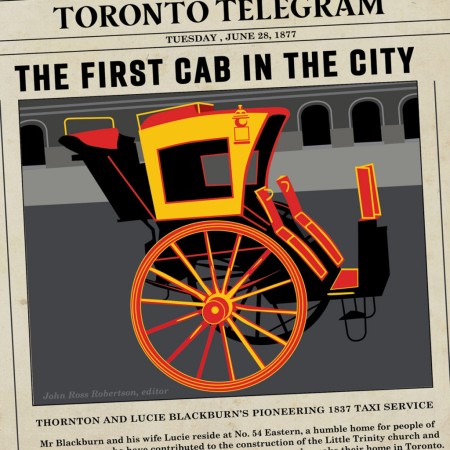 TORONTO, ON – Henderson Brewing has announced details of the latest in its Ides Series of monthly limited edition beers, which is once again a tribute to a little-known facet of Toronto’s history.

The City (4.5% abv) is a Traditional English Ale with the following back story:

In Toronto’s early days, it was known for its muddy and near impassable streets – earning it the nickname ‘Muddy York’. Thornton Blackburn was a waiter working at Osgoode Hall in 1837 when he hatched the idea for a cab company to make getting around Toronto easier. His first cab, named “The City”, was painted red and yellow, and its colours would eventually be adopted by the fledgling public transit service.

Unlike many of Toronto’s early entrepreneurs, Thornton had to overcome significant obstacles to achieve his success. He never had the opportunity to learn to read, having been born into slavery in Kentucky. He and his wife Lucie escaped slavery and endured many hardships on the Underground Railway which eventually brought him to Toronto. And in a mostly white Toronto, he often faced racism. In addition to his successful business, he helped build the Little Trinity church and worked with George Brown in the Anti-Slavery Society.

The beer itself is described as “a balanced pale ale exhibiting classic English hop character through peppery, woody and marmalade notes.”

The City will be officially launched tomorrow (June 19th), and can be pre-ordered now viat he Henderson online shop. 50 cents from each can sold will go to support the Black Business & Professional Association and its campaign for Toronto’s Little Jamaica neighbourhood.