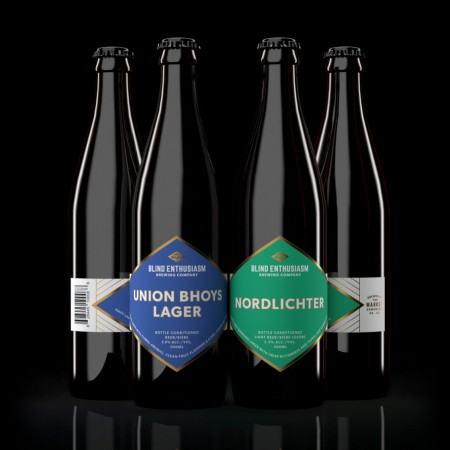 EDMONTON, AB – Blind Enthusiasm has announced the launch of a new series of bottle conditioned lagers and wheat ales.

The philosophy behind the series is described as follows:

These beers are bottle conditioned, meaning that we add a small amount of sugar and yeast to the finished beer to create natural carbonation in the bottle. Most packaged beers are force carbonated, meaning CO2 is forced into the beer under pressure in a fast process. Fast force carbonation generates more carbonic acid, which gives beer a characteristic bite. Bottle conditioning lagers and ales usually is a 2 to 3 week process and creates a smoother beer.

There are a couple advantage of bottle conditioning: the carbonation itself can seem more velvety, with smaller bubbles, and conditioning allows us to create higher carbonation with more effervescence than canned beers (which are rarely conditioned, and usually force carbonated quickly).

The first two beers in the series are lagers Union Bhoys (5% abv) and Nordlichter (3.5% abv). They can be pre-ordered now via the Blind Enthusiasm web store, and will be released tomorrow (July 1st) in singles and 4-packs of 500 ml bottles.