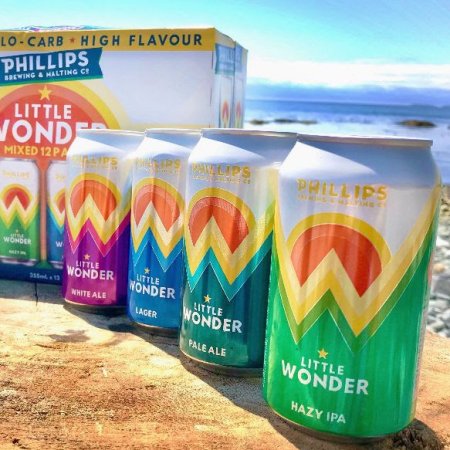 VICTORIA, BC – Phillips Brewing has announced the release of new mixed pack featuring four beers that are “light on alcohol and calories but big on flavour.”

Hazy IPA – Big citrus notes, and remarkably full bodied for a 4.0% abv, low calorie beer – hazy in appearance from the addition of wheat malt, spelt and flaked oats, and dry-hopped with a blend of Citra, Ekuanot, Mosaic, Sultana, and Sabro hops for a perfect balance of hop aroma and flavour.

Lager – A nice crisp dry lager coming in at 4.0% abv and 95 calories, with some North American hop punch for a citrus high note. This refreshing lager was brewed with a blend of our house-made Pale Malt, Carapils and Carahell and dry-hopped with a touch of Amarillo, Cascade and Ekuanot during its 21-day cold-aged lagering time.

White Ale – A supremely crushable 4.0% abv, low-calorie interpretation of the classic Witbier-style slides seamlessly into today’s active, health-conscious lifestyle. Lightly hopped and brewed with 50% wheat malt, sweet orange peel and fresh coriander for a balanced beer that is light and high on flavour.

The Phillips Little Wonder pack will be available year-round at private liquor stores in British Columbia and Alberta.