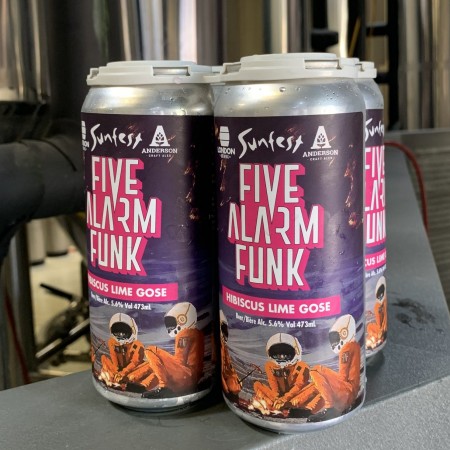 LONDON, ON – London Brewing and Anderson Craft Ales have announced the release of a new collaboration with band Five Alarm Funk for this year’s virtual edition of the Sunfest jazz and world music festival.

Both breweries were signed on as beer partners for the 2020 edition of Sunfest, which usually takes place in London’s Victoria Park each July. But due to COVID-19, this year’s festival will be happening online, with performances streaming on Facebook and YouTube on July 10th and 11th.

Five Alarm Funk Hibiscus Lime Gose (5.6% abv) is the official beer of the virtual festival, and is described as follows:

Just as fun as the band who inspired it, this Hibiscus and Lime Gose is perfect on hot days with bright notes of lime zest, sweet hibiscus, and a gorgeous hazy pink appearance. A hint of salt on the finish makes this a great pairing with lighter summer bites, ideally enjoyed outside on a hot summer evening.