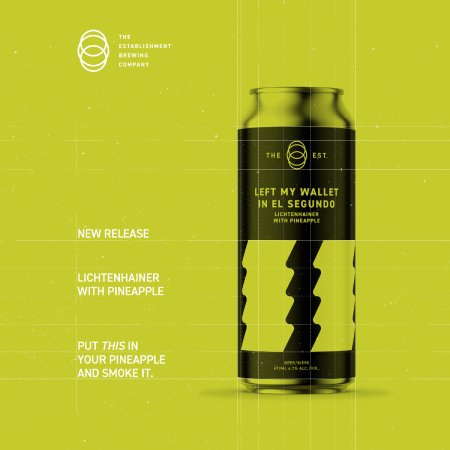 CALGARY, AB – The Establishment Brewing Company has announced the release of a unique take on a rare German beer style.

Left My Wallet in El Segundo (4.7% abv) is a Lichtenhainer brewed with pineapple, and is described as follows:

Brewing experimental new beers has always been a part of our tribe’s quest, and this one’s no exception. Tart like a Gose, this Lichtenhainer brings a fire all its own in the form of smoke. Unlike Bamberg’s smoky Rauchbier, the smoke on this other historical German style is from oak, not beechwood. This subtle difference puts this palette-pleaser more in the realm of grilled pineapple and less that of hot ham. Much more appropriate for summer sipping.

Left My Wallet in El Segundo is available now in 473 ml cans at the Establishment retail shop and online store while supplies last.