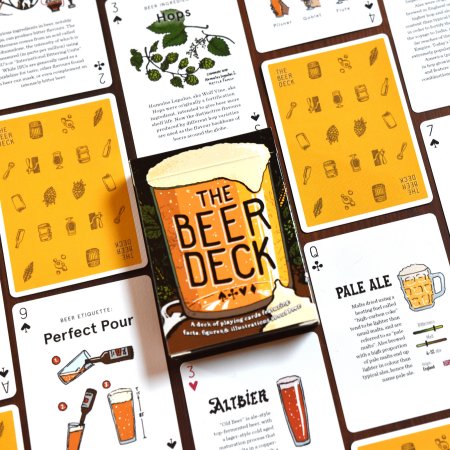 VICTORIA, BC – A pair of beer-loving creatives from British Columbia have announced the launch of a new project that offers “a playful way to improve your beer knowledge while enjoying your favourite card game.”

The Beer Deck is a set of playing cards from graphic designer Ben Barrett-Forrest and illustrator Caleb Beyers that is described as follows:

Each of the 52 cards focuses on one key beer subject, providing a concise explanation and detailed illustration. Whether you’re new to beer, or an old hand, the Beer Deck will improve your understanding of the world’s favourite frosty beverage. It’s like a miniature beer encyclopedia that you can also use to play solitaire, poker, or crazy 8s. The contents of the deck have been painstakingly researched and designed to provide a deep and comprehensive overview of the wide world of beer. From ales to lagers, IBU to ABV, the colour wheel and mouth feel, it’s all in the shuffle.

The Beer Deck is currently available to pre-order via Kickstarter, and once the campaign goal is met, the casino-quality cards will go into production at the United States Playing Card Company in Kentucky. Decks are expected to ship to campaign backers in late October, making them a great Christmas gift.