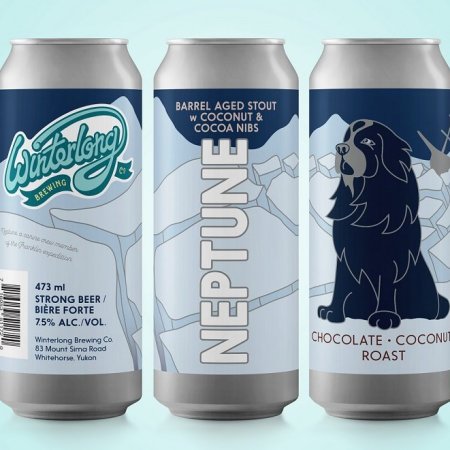 WHITEHORSE, YK – Winterlong Brewing has announced the release of the latest in a series of stouts inspired by the infamous and ill-fated Franklin Expedition.

Neptune (7.5% abv) was named after a Newfoundland dog that was part of the expedition, and is described as follows:

This strong stout was aged in the same bourbon barrels as our Terror 2020 for five months. To change it up we tried something new, by conditioning the beer on 50 lbs of toasted organic coconut and 11 lbs of Arriba Criollo organic cocoa nibs. It was a labour of love as the entire process took 6 hours of painstakingly toasting every single flake and nib in the oven and on the stove. This new stout remains full-flavoured and full-bodied, with just the right hit of coconut, chocolate and oaky-bourbon goodness.

Neptune is available now in 473 ml cans at the Winterlong retail shop and online store.