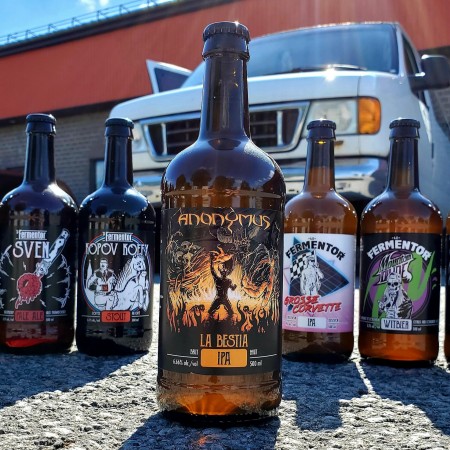 L’ASSOMPTION, QC – Microbrasserie Le Fermentor and veteran thrash metal band Anonymus have announced the release of a new beer to mark the release of the group’s latest album, La Bestia.

La Bestia IPA (6.66% abv) is described as an “easy to drink” beer that was “dry-hopped with Simcoe, Amarillo, and Mosaic hop [to] bring out the citrus, pine, and tropical fruit aromas.”

Anonymous guitarist and producer Jef Fortin is co-owner of Le Fermentor, which he launched in 2017 in partnership with Patrick Martin, vocalist of fellow Quebec thrash band Reanimator.

La Bestia is the 12th studio album from Anonymus, and their first to feature all Spanish vocals, honouring the shared heritage of drummer Carlos Araya, lead vocalist and bassist Oscar Souto, and guitarist Dan Souto.

A launch event for the new beer will be held tomorrow (July 22nd) at 7:00 PM at the brewery. For more details, see the Facebook event listing.