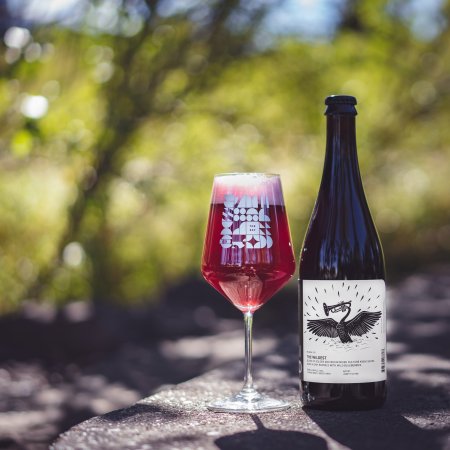 The Wildest (6.8% abv), which is “named for Louis Prima’s near-flawless album“, is a barrel-aged kveik sour with wild blueberries that is described as follows:

First, we hit it with Norweigan farmhouse Kviek yeast for the initial fermentation before singing it to sleep in neutral oak barrels to steep in our house wild. Then, over many months, these yeasts were left to mix, mingle, and jive with bacteria cultures before we splashed their party with a truly wild amount of wild blueberries. This beer came out rocking a deep purple body and a poppy pink head – looking a bit like a Lambrusco. But in this case fancy is fine by us, because nothing’s too good for my baby. This brew’s a blend of the best dark and golden sour characteristics – hi-hat brightness in perfect balance with bassy malt elements – perfect for the changing season. Its beauty hue and tart taste make every last sip of summer one to dye for. We’d go so far as to call it the reigning king of swig, and we hope you agree.

The Wildest is available now in 750 ml bottles at the Establishment retail shop and online store while supplies last.