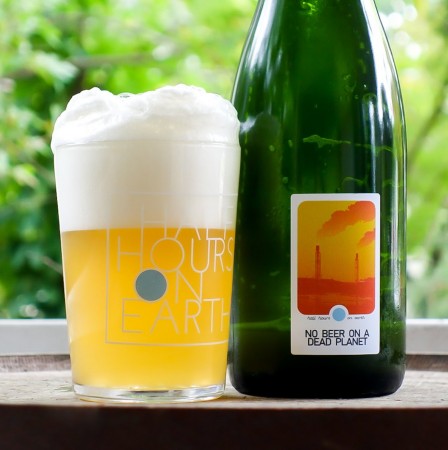 No Beer on a Dead Planet (5.5% abv) is a Farmhouse Saison described as follows:

Mixed fermentation Saison, stainless-aged for four months. Brewed with additions of wheat and oats. Hopped with Hallertau Mittelfruh, Opal, and Styrian Golding. This is the type of Saison that got us into Saisons. Noble hop aromatics, earthy, floral, hay, and spice. Pronounced bitterness, crisp, and dry. Notes of lemon, honey, pepper, and subtle Brettanomyces funk. Overall, an effervescent classic pale Saison.

And as for the name of the beer…

FYI, barley, wheat, hops, etc require healthy, fertile soil and a stable climate to grow. Fertile soil is being lost at a rate of 24 billion tonnes a year from unsustainable agriculture. While climate change-induced weather patterns aren’t making it any easier for crop yields. So while the lack of beer will be the least of our worries in the coming decades, this beer is just a little reminder of that.

No Beer on a Dead Planet is available now in 375 ml bottles at the Half Hours on Earth brewery store and online shop while supplies last.