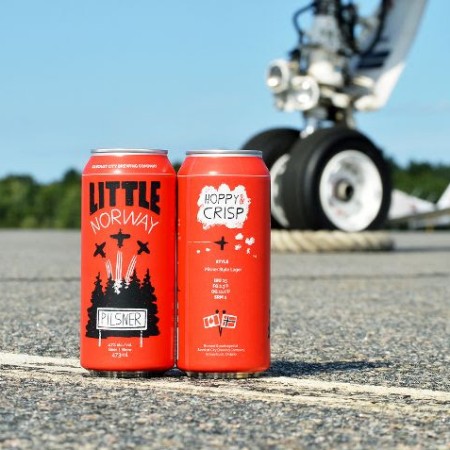 GRAVENHURST, ON – Sawdust City Brewing has announced that one of its core brands has been given a new recipe, and a new name to go with it.

Little Norway Pilsner (4.7% abv) is an evolution of Little Norway Pale Lager, a beer that was launched in Norway in 2014 as a collaboration between Sawdust City and Arendals Bryggeri, with a Canadian release following in 2015.

Named after a base near Sawdust City’s hometown of Gravenhurst where Norway’s air force trained during World War II, Little Norway has been tweaked as described by brewmaster Sam Corbeil:

Seven years ago, Little Norway Pale Lager began as a collab with a small Norwegian brewery. It was intended to be a celebration of our two countries’ shared heritage. It was brewed as a light approachable lager, something any new craft beer drinker could enjoy. But over time we’ve changed and we’ve evolved, and not just us at Sawdust City; but also you, our loyal customers. So in order to embrace our shared evolution, we are pushing Little Norway in an exciting new direction. It will still be the crisp, enjoyable lager you’ve come to love, but with a more pronounced hop character, enough so to earn it the title of Pilsner. We’ve also slightly increased the ABV to keep the beer balanced and drinkable. A gentle floral, spicy aroma welcomes you, while a crisp, snappy bitterness entices you to take another sip. We hope you enjoy this elegant new twist to our local fan favourite. We know you’ve earned it!

Little Norway Pilsner will be available soon at the Sawdust City retail store and online shop, as well as select Beer Store and grocery locations in Ontario.