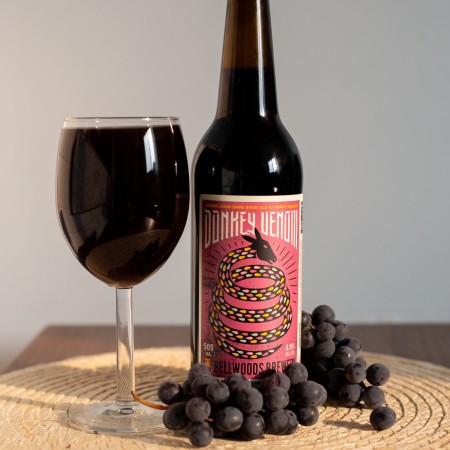 TORONTO, ON – Bellwoods Brewery has announced the latest edition of one of its best-loved barrel-aged beers.

Donkey Venom with Gamay (9.9% abv) is described as follows:

One of the first aged sours to leave oak at Bellwoods, Donkey Venom is a complex beer that we release a couple times each year. At its roots it’s a rich, dark ale, but the time it spends in barrels with brett and bacteria harmonizes the ingredients, yielding bright levels of acidity and complimentary fruit flavours. A hybrid style of sorts, that defies simple categorization.

As noted by its name, this new variant of Donkey Venom was aged on Gamay grapes.

The Gamay version of Donkey Venom is available now alongside the regular version at both Bellwoods retail stores and the brewery’s online shop while supplies last.