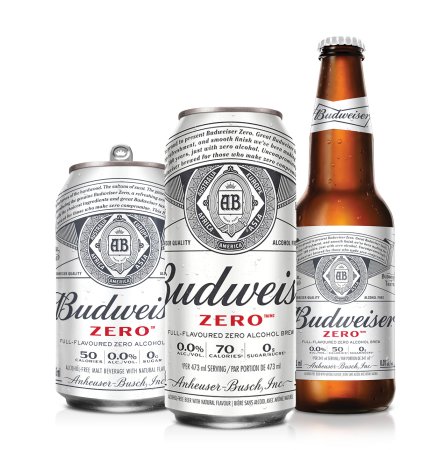 TORONTO, ON – Labatt Breweries has announced the official launch of a new non-alcoholic beer brand in the Canadian market.

Building on the legacy of Budweiser Prohibition Brew, which was a leader in growing the non-alcoholic beer segment, Budweiser Zero features 0.0% alcohol, zero sugar, and only 50 calories [per 341 ml serving]. Brewed from a brand-new recipe, Budweiser Zero reflects consumers’ desire for new and health-conscious options while offering the full-flavoured, smooth, and crisp taste that beer lovers expect from Budweiser. It’s a great choice for any occasion, and especially for people making positive lifestyle choices.

According to the announcement, the release Budweiser Zero is intended to help meet the increasing demand for non-alcoholic beer and other healthier drink options, especially among millennials:

The 19-to-34-year-old age group – which includes millennials and older members of Generation Z – led all demographic groups in consumption volume of non-alcoholic beer including Budweiser Prohibition Brew, launched in 2016 as Budweiser Canada’s first no-alcohol beer. Overall, 64% of no- and low-alcohol beer is consumed by those in the 19-to-34 bracket, with women most often choosing non-alcoholic beer as an alternative to sugary drinks while men see it as suitable for a variety of social occasions.

“As a global leader in alcoholic beverages, we have an essential role to play in reminding Canadians of the importance of moderation and positive mental and physical health choices,” said Mike D’Agostini, Marketing Director, Budweiser Canada. “In these challenging and stressful times, we’re urging Canadians to ‘Drink Wiser’ and make smart decisions for their overall wellness, and we’re encouraged that the millennial cohort is already taking a stand.”