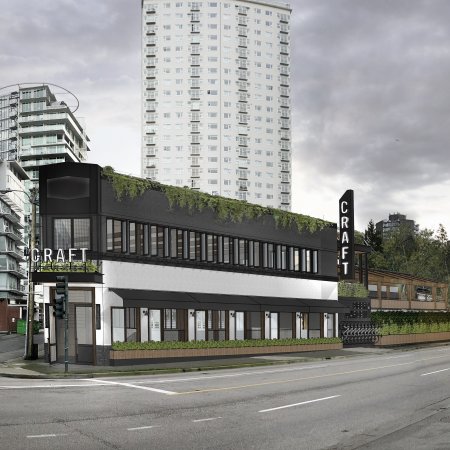 VANCOUVER, BC – Nine months after it was first reported, CRAFT Beer Market has announced full details for its upcoming second Vancouver location in the city’s English Bay neighbourhood.

Situated in a spot that was previously home to seafood restaurant The Boathouse, the new CRAFT will follow a similar model to other locations in the national chain, but there will be differences as well, some of them related to the ongoing COVID-19 pandemic.

The new CRAFT Beer Market English Bay features an impressive 11,000 square foot space that will span two floors, complete with a covered patio that will treat guests to the iconic views of English Bay throughout the year. The interior design and decor was heavily influenced by the West End neighbourhood and its waterfront location, incorporating wood elements, a sophisticated beach vibe and locally sourced art.

The English Bay location will be the first in its portfolio to introduce new serverless sections to the establishment where guests will be able to make orders via an app and have the ability to sit at any open tables in the sections. It will also feature another first for CRAFT – a bottle shop where guests will be able to purchase limited quantity reserve craft beers for dine-in or take out. The carefully curated selection will include beers from local and North American breweries and will change seasonally, featuring bottles ranging from $20 to $60.

In addition, CRAFT will continue to offer the extensive draft selection they are known for with over 100 beers, ciders and meads that are complemented with an upscale menu of comfort foods, wine and unique cocktails.

CRAFT English Bay will be opening later this year at 1795 Beach Avenue in Vancouver. For more details, see the CRAFT Beer Market website.