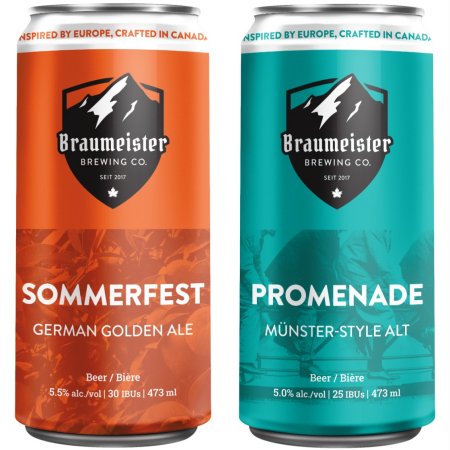 CARLETON PLACE, ON – Braumeister Brewing has announced the return of two seasonal favourites.

Sommerfest (5.5% abv) was originally available in the summer of 2019, and is described as follows:

As golden as a summer day, this German golden ale is brewed and dry-hopped with Mandarina Bavaria hops, a dash of honey malt, and an ale yeast from Munich, giving this beer a unique sweetness with hints of mandarin and citrus.

Promenade (5% abv) made its first appearance back in the spring, and has the following notes:

Inspired by the Altbier of Münster, this beer is a rich, golden colour, thanks to a blend of five different malts. An authentic Altbier yeast and unique German hops provide a mild fruity character that pays homage to the original style.

Both beers will be released later this week in the Braumeister retail store and online shop.