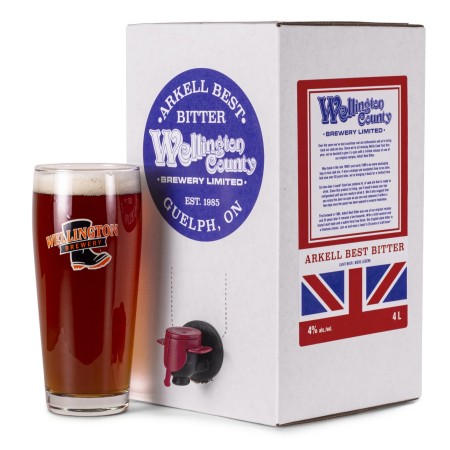 GUELPH, ON – Wellington Brewery has announced that it has brought back a unique packaging format from its earliest days as part of the celebrations of the brewery’s 35th anniversary.

Way back in the late 1980’s and early 1990’s we were packaging bag-in-box cask ale, it was a strange and wonderful time to be alive. And now over 30 years later, we’re bringing it back for a limited time.

So how does it work? Each box contains 4L of cask ale that is ready to drink. Since this product is living, you’ll need to keep your box refrigerated until you are ready to drink it. We’d also suggest that you enjoy this beer as soon as you can and consume it within a few days once the spout has been opened to ensure freshness.

The beer featured in the box is Arkell Best Bitter (4% abv), one of Wellington’s original brands, and still a popular one today, especially on cask. It’s described as having “a mild caramel and biscuit malt body and a subtle floral hop finish.”

The 4L boxes of Arkell Best Bitter are priced at $35, and are available now for in-person sales at the Wellington walk-up window, and can be ordered for local delivery via the brewery’s online store.