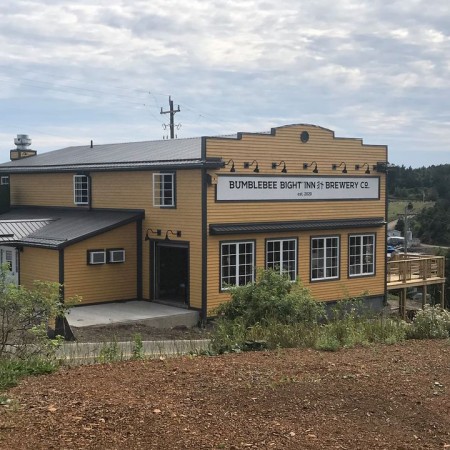 PILLEY’S ISLAND, NL – A new brewpub in the small town of Pilley’s Island on the north coast of Newfoundland has announced the release of its first beers.

Bumblebee Bight Inn & Brewery has been founded by Deno and Natalie Colbourne, and is located in a historic 150-year-old building that had been empty for many years before the Colbournes took it over.

Originally planned to open in early summer but delayed due to COVID-19, the business is now launching in phases, with the restaurant opening in August while brewing of the house beers got underway.

The first of those beers, Pretty Island Lager (4.5% abv), went on tap in mid-September, and was joined more recently by Flat Rock Amber Ale (6% abv). West Bottom Pilsner (5.5% abv) is due for release later this week, and will be followed by Halls Bay Pale Ale and two other core brands to be announced.

The final phase of opening is expected later this autumn, when the inn’s five guest rooms will be available to reserve for stays.

Bumblebee Bight Inn & Brewery is located at 188 Main Street in Pilley’s Island, and is open at 12:00 noon daily except for Mondays, closing 9:00 PM on Friday and Saturday, and 7:00 PM on other days. For more details, see the Bumblebee Bight Facebook page, and the recent brewery profile on the Atlantic Canada Beer Blog.