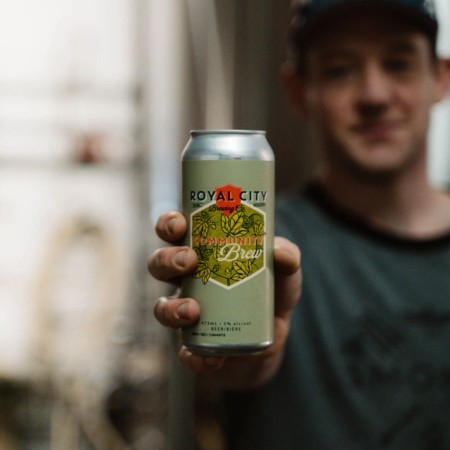 As explained by the brewery:

For the last 4 years, springtime at Royal City Brewing means that The Ward Room is filled with baby hop plants ready to find homes. Each hop is picked up in exchange for a $10 donation to Autism Behavioural Services in Fergus. We send each hop to it’s new home to be planted in backyards across the city and nurtured all summer long. Over the last 4 years we’ve found homes for over 500 hop plants across the city of Guelph and beyond! And this year we are thrilled to be able to donate an additional $1500 to ABS from all the hop purchases in 2020. At the end of August, we invite the backyard hop growers, new and from years past, to come back to the brewery with their harvest and contribute to this collective beer, Community Brew!

This year’s version of Community Brew (5% abv) is described as follows:

Community Brew pours a beautiful cloudy golden colour with an off-white head. The hop character on the nose is a combination of lemon, forest floor, fresh cut grass, and a hint of pine. The malt aroma is of fresh bead with a hint of rye spiciness. On the palate, a cereal grain character leads into a hit of lemon and grass with a more earthy hop character emerging as the beer warms. The beer finishes with a touch of spice and bitterness. There are lingering notes of breakfast cereal, and a “green” hop flavour.