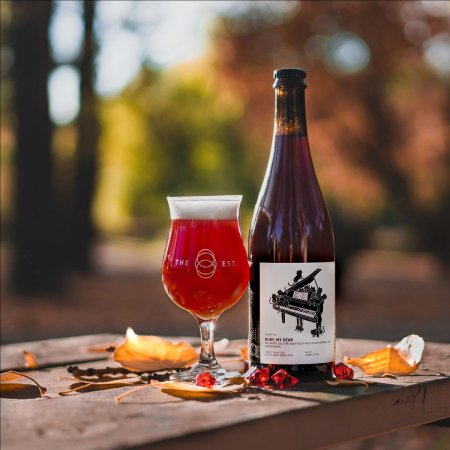 Ruby, My Dear (7.7% abv) is named after a classic Thelonious Monk number, and is described as follows:

Much like its namesake, this Ruby is a red-style sour, so the caramelized malts are owed credit for some of the colouring and sweeter notes of near-burnt sugar. Ruby spent months in barrels, bebopping around on our house mixed cultures, getting her sour on and absorbing a touch of oak character. Then, following the lead of those cool Belgium cats, we fruited this sour hard – hammering it with 20% its weight in raspberries to amplify its already-rich colour and flavour.

It’ll trickle past your ivories to hit your palate with a harmonious funk and a taste as rich as both the colour it boasts and the precious gem for which it’s named. Thelonious Monk is quoted as saying “The piano ain’t got no wrong notes”, and we’d go so far as to say we feel the same about this beer. It’s a lustrous precious gem – a real ruby sipper. Get your mitts on this beer before mittens become mandatory.

Ruby, My Dear is available now in 750 ml bottles at the Establishment retail shop and online store while supplies last.