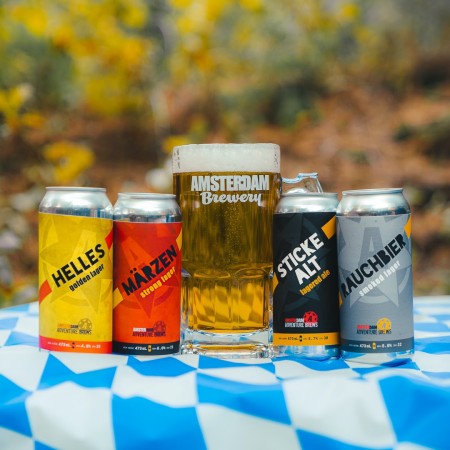 TORONTO, ON – Amsterdam Brewery has announced the release of four beers to celebrate the Oktoberfest season.

This Munich style Helles is a golden lager with subtle aromas of wildflower honey and green tea. A soft mouthfeel with biscuit malt flavour is balanced by a noble hop finish

Rauchbier (literally “smoked beer”) was a specialty of the German city of Bamberg. Deep amber in colour, the smokey character of Beechwood smoked malt is balanced by richer flavours of Munich malt to produce a refreshing and unique lager.

Originally brewed during March in Germany, Marzen style beers would be aged over the warmer summer months to be consumed in the fall. Copper in colour, this lager is medium to full bodied with hints of toasted bread and biscuit malt character.

Traditionally brewed once a year to coincide with a special release around Dusseldorf, this “lagered ale” is brewed with Munich malt and has a bready body with hints of raisin and caramel that leads into a dry satisfying finish.

All four beers are available now at both Amsterdam retail shops and the brewery’s online store, and can be purchased separately or in a mixed four-pack, including a limited edition package featuring the beers and a branded stein for $20.