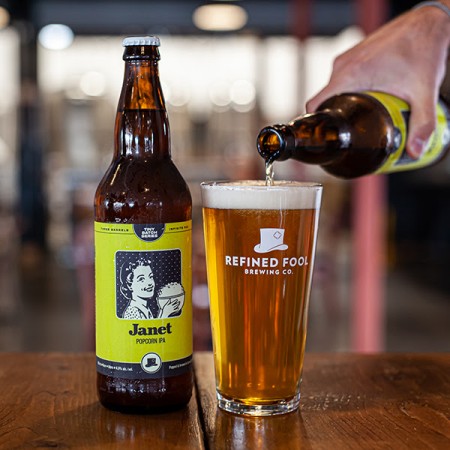 SARNIA, ON – Refined Fool Brewing has announced the launch of a new series of limited run beers brewed on a 3-barrel pilot system as “an excuse for our team to get a little crazy and have a lot of fun with more experimental beer styles.”

Kicking off the Tiny Batch Series is Janet Popcorn IPA (4.5% abv), which was brewed in collaboration with the local location of Kernels Popcorn, and is described as follows:

We dumped 16 kilos of popcorn into this batch and you can taste it! It’s got all the citrusy and hoppy characteristics of a classic IPA (we used sasquatch and sabro hops) with an added layer of sweet kernel essence that keeps you snackin’. It’s our way of bringing back that classic pre-pandemic feeling of duct taping a bunch of IPA’s under your jeans and sneaking them into the theatre to wash back your oversized bucket of popcorn.

Janet Popcorn IPA is available now in 650 ml bomber bottles and on tap at both Refined Fool locations, with bottles also available via the brewery’s online store.