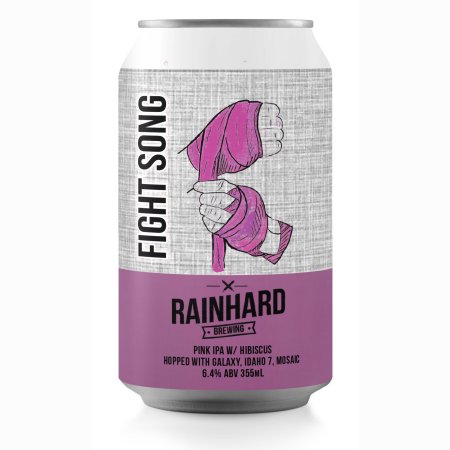 TORONTO, ON – Rainhard Brewing has announced the release of a new beer to raise funds for after BREAST CANCER, a local charity that supports women who are “graduates” of breast cancer.

Fight Song (6.4% abv) is described as “an India Pale Ale made with Galaxy, Mosaic and Idaho 7 hops as well as a generous dose of hibiscus flowers to give the beer a distinctive pink hue.”

Fight Song will be released on tap and in cans at Rainhard on Friday October 9th, and an official launch will follow on Saturday October 10th with representatives from after BREAST CANCER on hand, and food by Tokyo Hot Fried Chicken.

Rainhard will be donating $1 per 355 mL can and pint sold in its store/taproom, as well as $10 for each 30 litre keg sold to licensees, to after BREAST CANCER. Tokyo Hot Fried Chicken will also donate 50 cents from each food item sold at the launch event.