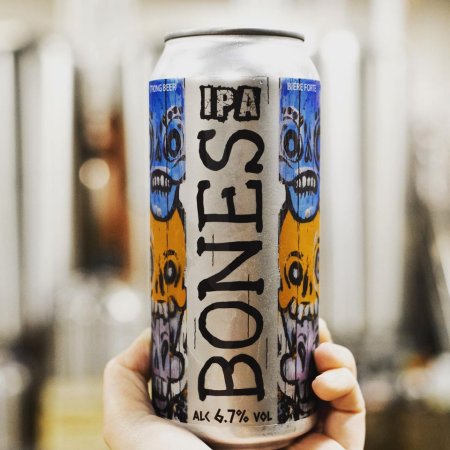 VICTORIA, BC – A new brewing company in Victoria has announced the launch of its first beer, with two more set to follow soon.

Bones Brewing has been founded by Mike Roberts, who recently moved back to Victoria following a number of years living in Thailand, where he owned and operated a small brewery.

Currently brewing under contract at Twa Dogs Brewery while planning for a physical location, Bones Brewing officially launched in late September with the release of Bones IPA (6.7% abv), which features “tropical riffs of passionfruit and citrus laid onto a resiny hop backbone and pale malt.”

Bones IPA is currently available at private liquor stores in Victoria and Vancouver Island, with distribution expanding soon to Vancouver and other areas. Bite Me Raspberry Sour and Meta Mosaic IPA are planned to follow in coming weeks.

All Bones beers are packaged in cans with artwork from telephone poles in Fernwood, a Victoria neighbourhood populated by many artists who decorate the poles with their creations. Bone IPA features work by Onion Head, and the future releases will spotlight art by Beth Threlfall and Bozo.