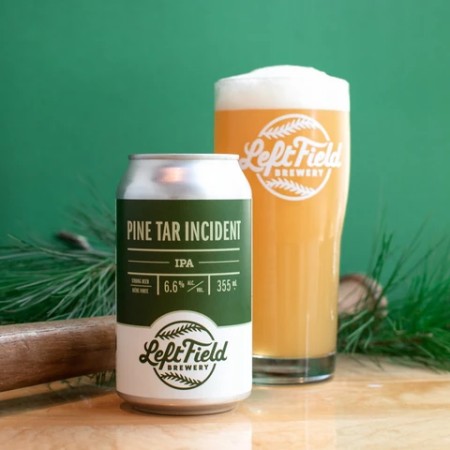 TORONTO, ON – Left Field Brewery has announced the return of a “a dank, flavourful tribute to one of the game’s most controversial home run calls.”

Pine Tar Incident IPA (6.6% abv) was made using “a generous amount of Simcoe and Chinook hops,” resulting in a beer that “explodes with juicy citrus and a bracing piney bitterness”. Its name has the following backstory:

We’re taking it back to the summer of ‘83. George Brett just hit a stellar two-run home run in the top of the ninth, putting the Royals in the lead against the Yankees. Brett skips across home plate, celebrating this huge feat, but the Yankees waste no time disputing that there was more than the legal amount of pine tar on the bat. The home run is quickly reversed, ending the game in a Yankees victory and George Brett goes ballistic! He leaps from the dugout in a storm of fury, only to get ejected from the field. The Royals protested the game and their protest was upheld, resulting in a continuation of the game from the point of Brett’s home run and a Royals 5-4 win, 25 days later.