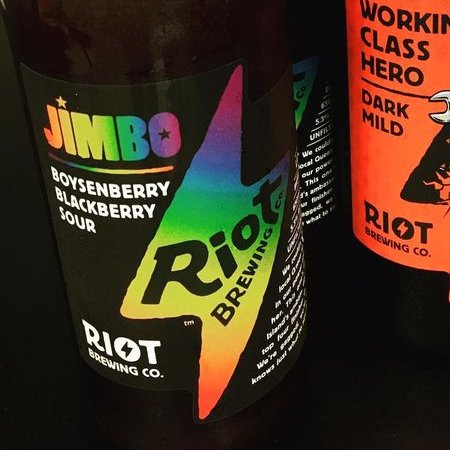 CHEMANIUS, BC – Riot Brewing has announced the release of a beer brewed in honour of a local drag queen who was a fan favourite on the recent first season of Canada’s Drag Race.

We couldn’t be more proud of our local Queen so we did the only thing in our power and named a beer after her. This one’s for Jimbo, Vancouver Island’s ambassador of televised drag and top four finisher on Canada’s Drag Race. We’re gagged, we’re speechless but Jimbo knows just what to say: It’s MY SPECIAL BEER!!!

Jimbo Boysenberry Blackberry Sour is available now at Riot Brewing, and next week at select private liquor stores. A portion of sales will be donated to the Kickstarter for The House of Jimbo, a comedy and variety show that will be “set in the fantastic world of Jimbo himself and will feature skits, singing, drag queen oracles, magic windows, talking works of art, puppets, digital art explosions and surprise guests!”