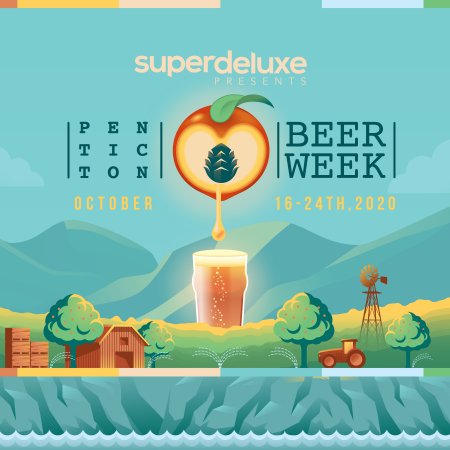 PENTICTON, BC – The 2nd annual edition of Penticton Beer Week will be kicking off tomorrow, celebrating the city’s seven breweries and local beer culture.

Running from October 16th to 24th, 2020, this year’s edition will feature events and theme days at breweries and other venues – all with COVID-19 protocols in place – as well as a couple of online virtual events.

The week is also being marked with the release of a limited edition beer, The Penticton Seven Hazy Pale Ale (5.3% abv). Brewed at Bad Tattoo Brewing in collaboration with Cannery Brewing, Neighbourhood Brewing, Tin Whistle Brewing, Barley Mill Brewpub, Highway 97 Brewery, and Slackwater Brewing, the beer was made with Ekuanot and El Dorado hops contributed by Scott Labs, and features a label designed by Super Deluxe Creative and printed by Summit Labels, with partial proceeds going to the BC Hospitality Foundation.

“With seven craft breweries in Penticton, we enjoy working together to showcase our exciting and dynamic craft beer scene,” said Penticton brewery collective manager Kim Lawton in a statement. “Earlier this year, travel giant Lonely Planet named Penticton as Canada’s Craft Beer Capital, which is incredible recognition for what we are doing together. We launched Penticton Beer Week as a way to celebrate craft beer. Despite all of the challenges this year, we decided it was important to celebrate Penticton’s craft beer scene with a Penticton Beer Week designed to work within the current pandemic situation.”