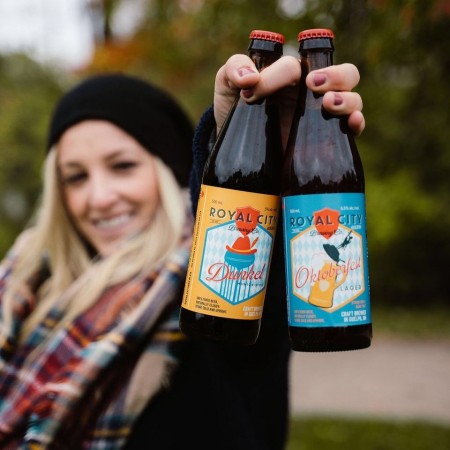 Oktoberfest Lager (6.5% abv) and Munich Dunkel (5% abv) were both due for their annual releases a few weeks ago, but were held back to allow for further conditioning until the brewing team felt they were ready for drinking.

Oktoberfest Lager is described as follows;

This is an old school Oktoberfest Lager with aromas of brown bread crust, caramel and nuts. On the palate, juicy-malt character leads into elegant bread and nut notes. This beer finishes with a caramel nut combo and a hint of herbal, grassy hops. This is a full-bodied beer with a good amount of carbonation as well as a slight hop-bitterness to keep it refreshing, especially after a long day of fall yard chores or pairing with salty pretzels and Oktoberfest merriment.

Munich Dunkel has the following notes:

This is a dark lager that pours a light brown with lots of reddish hues when held to the light. Aromas are of brown bread and a hint of hay. On the palate the brown bread makes a second appearance and works nicely with the hint of molasses and touch chocolate. The beer is refreshing and flavourful. A great option as the temperature drops a little but you still want to enjoy a pint on the porch.

Both beers are available now in the Royal City retail store and online shop while supplies last.