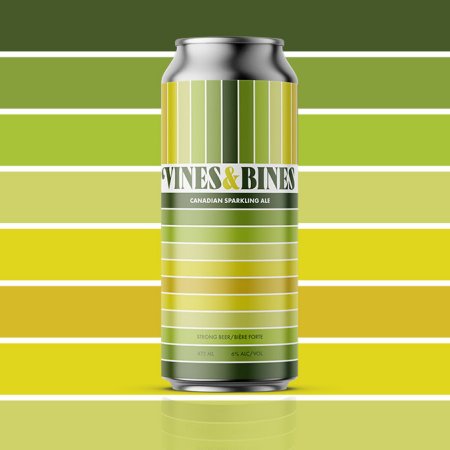 CALGARY, AB – Cabin Brewing has announced the release of a collaboration with City & Country Urban Winery.

Vines & Bines (6% abv) is a beer-wine hybrid that they have dubbed a “Canadian Sparkling Ale”. It’s further described as follows:

From the vines come the grapes, from the bines the hops. Vines & Bines is a true Canadian product. It is a clear, highly effervescent Kolsch-style ale made with Alberta barley from Origin Malting and fermented with Sauvignon Blanc grape juice and skins from the Niagara-on-the-Lake wine region in Ontario. It finishes dry and crisp with luscious stonefruit notes and hints of lychee and lime. It is dry-hopped with the New Zealand hop varietal Nelson Sauvin, known for its aromatic qualities akin to Sauvignon Blanc wine. It comes in a can, but you may want to enjoy it from a champagne flute – go ahead, we won’t judge…

Vines & Bines will be released today (October 22nd) at 3:00 PM in the Cabin taproom and retail store, with a special dry-hopped cask to be tapped at 4:00 PM. It will also be available soon at select liquor stores in Calgary and area.