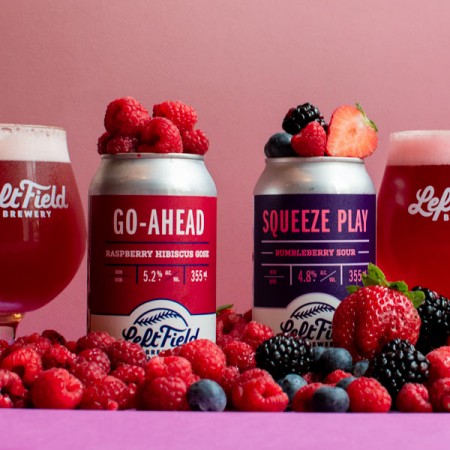 Squeeze Play Bumbleberry Sour (4.8% abv) is the latest in the Squeeze Play series of fruit flavoured sours, and is described as follows:

Did you know that our Head Brewer Dan hails from Newfoundland? In the Maritime provinces, when you see Bumbleberry as a flavour, it means that whatever you’re feasting on is made with at least three different berries. This serves the inspiration for the newest version of this sour ale. A quadruple threat bursting with tart strawberry, blueberry, raspberry and blackberry for a puckering and quenching finish.

When the go-ahead run is scored, it gives a team the lead position, dramatically propelling them forward in a close game situation. Bursting with plump, fresh raspberries, tart lemony hibiscus, and a gentle saltiness, Go-Ahead Raspberry Hibiscus Gose evokes that same electric celebratory moment any time.

Both beers are available now at the Left Field retail store and online shop.