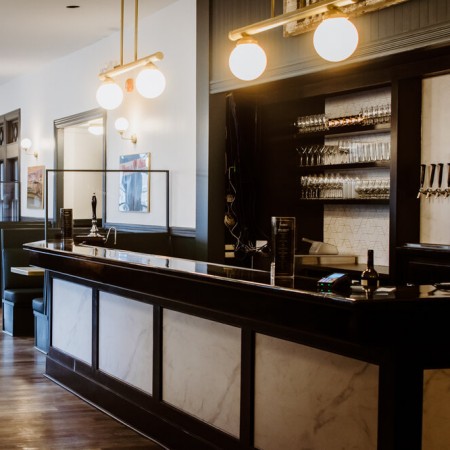 BRIDGETOWN, NS – Just short of three months since it was first announced, Lunn’s Mill Beer Co. of Lawrencetown, Nova Scotia has opened a companion “Modern Craft Eatery” in the nearby community of Bridgetown.

The Station is located in a former railway station that was in operation as the End of the Line Pub for 26 years before Lunn’s Mill owners Sean Ebert, Chad Graves, and Chantelle Webb took it over earlier this year.

The restaurant opens at 9:00 AM daily for breakfast, and shifts to lunch and dinner service through the day and evening, closing at 9:00 PM Sunday to Wednesday, and 12:00 midnight Thursday to Saturday.

The bar currently has beers from the original Lunn’s Mill brewery on tap and cask, with an on-site brewhouse for small batches to be added in the near future.

Beers from other Nova Scotia breweries are available on guest taps and in bottles and cans, and the bar also offers a selection of cider, wine, and spirits, with a wider range of the latter featured in the speakeasy-style Side Car Lounge which opens a 6:00 PM daily.

The Station is located at 73 Queen St. in Bridgetown. For more information including food and drink menus and reservation details, see its website.