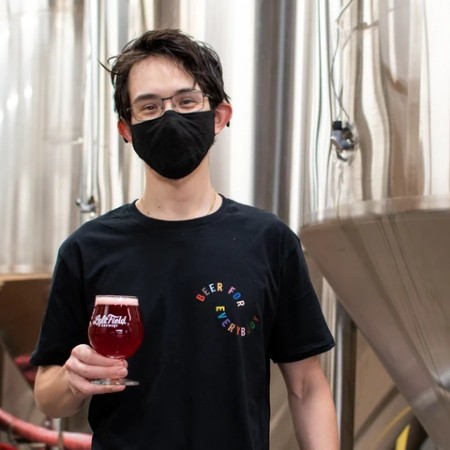 TORONTO, ON – Left Field Brewery has announced the launch of a new initiative born out of the brewery’s belief that “beer can be a powerful tool to build community, to bring people together and to drive positive change.”

Beer For Everybody is explained as follows:

At Left Field, we believe in a just and equitable society for all. We do not tolerate discrimination on the basis of race, gender, gender identity and expression, sexual orientation, religion, differing abilities, physical appearances or any other human differences. This is the case not only between our own four walls but also within our communities and has been at the core of who we are as an organization since we first opened our doors. We remain committed to actively upholding these values over the long term.

Beer For Everybody is an initiative to showcase and support local organizations that work to dismantle systemic inequities. On day one, this initiative will include fundraising through the sale of apparel, beer and merchandise and leveraging our voice and platforms to highlight the mission and impact of these organizations. It also marks the beginning of an annual BIPOC brewing college scholarship. Beer for Everybody is not a campaign, but rather a statement of our beliefs and a name under which we will continue to take action to uphold our commitments to equity and inclusion.

The first beneficiary of the fundraising aspect of Beer For Everybody will be FoodShare, an organization that has a “focus on food justice by working to dismantle oppressive structures that hold poverty and food insecurity in place.”

All profits from sales of Beer For Everybody apparel from now until March 2021 will be donated to FoodShare, along with $2 from each Left Field Sampler 6 Pack sold in October and November.

The brewing college scholarship for BIPOC students will be offered in partnership with the Niagara College Brewmaster and Brewery Operations Management diploma program, with $3000 being awarded annually in increments of $1000 to one student entering each of the three course intakes throughout the year.