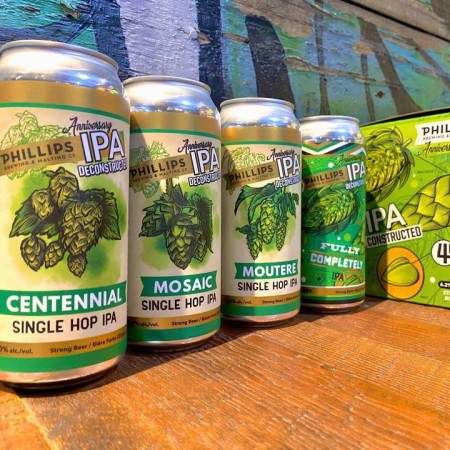 VICTORIA, BC – Phillips Brewing has announced the release of a special mixed pack to celebrate its 19th anniversary.

The IPA Deconstructed Mixpack has the following explanation:

How do we go about deconstructing an IPA exactly? Well first, we’ve included three single hop IPAs so you can see what each of these hops are bringing to the party. The final 473mL can in this festive four pack combines all three hops so you can taste how they all come together for one truly delicious dance party on your palate. Two of the hops included here have a notable link to our brewing past with the final hop chosen because of how much fun we’re been having brewing with it recently. After all, there’s nothing we love more than finding delicious new hop varieties that get our brewer’s imaginations running wild.

The IPA Deconstructed Mixpack is available now at the Phillips retail store and select private liquor stores in British Columbia, and will be distributed soon in Alberta.

For more details including a full description of each of the beers, see the announcement on the Phillips website.