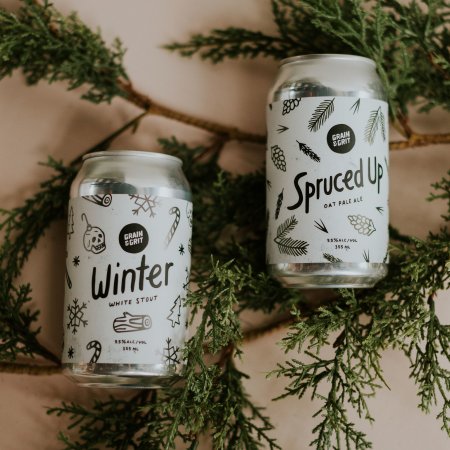 HAMILTON, ON – Grain & Grit Beer Co. has announced the release of three beers today, including a pair of winter seasonals, and a new “East-meet-West-coast-style” IPA.

Winter White Stout (5.5% abv) is returning for its third annual visit, and has the following notes:

Brewed with candy cane, cacao and oats, it’s everything you love about the holiday season, in a can. Chocolate and mint flavour and aroma, reminiscent of After Eight. Dry finish with pillowy mouthfeel and subtle lemon.

Spruced Up Oat Ale (5.5% abv) is a new beer made from the same base recipe as Winter White Stout, but with different flavours:

Spruced Up is brewed with loads of oats and a blend of Centennial hops with spruce tips. You’ll want to curl up by the fire with this beauty, and let the smells and tastes of the winter season sink in. Aromas of spruce and lemon, with strong spruce flavour upfront, subtle sweetness and full mouthfeel. Finishes dry and with pleasant lingering bitterness and flavours of pine and grapefruit pith. 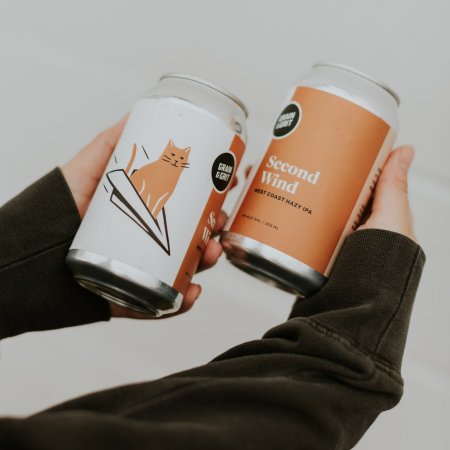 Second Wind IPA (6% abv) is Grain & Grit’s first attempt at the relatively new West Coast Haze style, which combines elements of New England IPA and West Coast IPA. While it didn’t come out as hazy as planned, it was a successful experiment otherwise:

This IPA is smooth and easy to drink, with a dry finish that you would expect from a West Coast IPA, with the juiciness of a NEIPA. Throw in a medley of tropical fruits like mango and papaya upfront and a pleasant grapefruit finish with subtle bitterness, and you have the perfect storm for any IPA lover!

All three beers are available now at the Grain & Grit online shop, and tomorrow (December 2nd) at the brewery taproom and retail store.