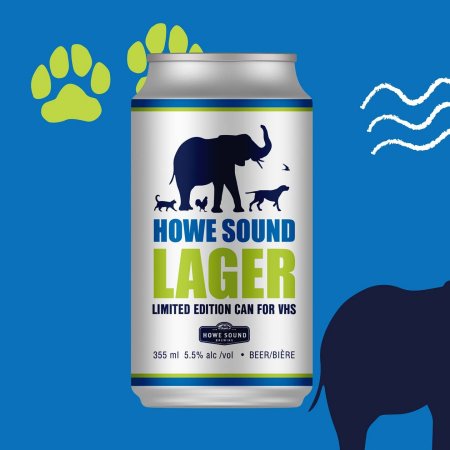 SQUAMISH, BC – Howe Sound Brewing has announced the release of a specially rebranded version of one of its flagship beers to raise funds for the Vancouver Humane Society.

The limited edition cans of Howe Sound Lager (5.5% abv) have the usual ship image replaced with the animal silhouettes from the VHS logo, and the following message on the back:

The Vancouver Humane Society assists low-income pet owners with veterinary expenses through our McVitie Fund, which was named after a little ginger cat called McVitie, meow-ny years ago. We help pets that are suffering from debilitating injuries and illnesses. The program significantly benefits individuals who are elderly and disabled, whose lives are much improved by sharing it with a four-legged friend. Your support will enable us to help over 100 animals per year.

The special edition of Howe Sound Lager is available at the brewery retail store and online shop, and select private liquor stores in British Columbia. 50 cents from each six-pack sold will be donated to the Vancouver Humane Society.