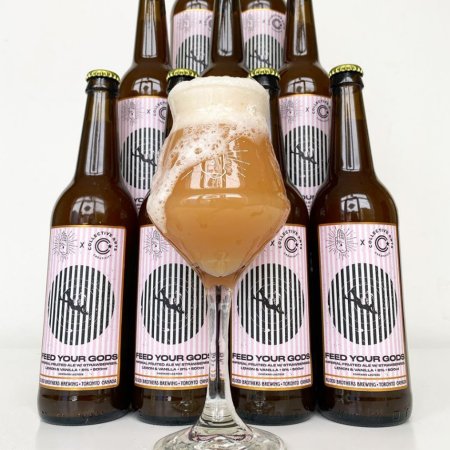 TORONTO, ON – Blood Brothers Brewing has announced the release of a new collaboration with the recently opened Toronto brewpub location of Collective Arts Brewing.

We brewed some beers with the fine folks at Collective Arts to welcome them to the neighbourhood. For this welcoming party we cooked up a fresh batch of strawberry shortcake. We brewed a soft and pillowy ale with a touch of lactose and conditioned it on whole strawberries, fresh lemons and vanilla. It tastes like cake.

Feed Your Gods will be released tomorrow (Saturday December 12th) at 11:00 AM in the Blood Brothers taproom and retail store along with two other new Blood Brothers beers – Lazarus Syndrome Spontaneous Blend (7% abv) and Guilty Remnant White Stout with Coconut & Coffee (6% abv).

Remaining stock of the three beers will go on sale via the brewery’s online shop on Sunday December 13th at 12:00 noon.