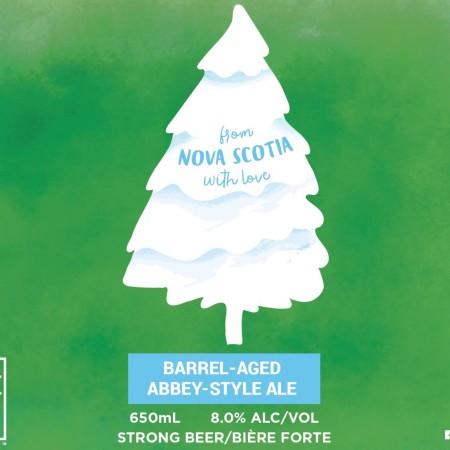 BADDECK, NOVA SCOTIA & BOSTON, MA – Big Spruce Brewing and Harpoon Brewery have announced the release of a new collaboration that honours an annual cross-border tradition that dates back more than a century.

From Nova Scotia With Love (8% abv) has the following back-story and description:

From Nova Scotia With Love is a beer brewed to celebrate the support, kindness, and quick response the City of Boston and its citizens provided after the Halifax Harbor explosion in 1917. To show their gratitude, the people of Nova Scotia have annually sent the people of Boston a majestic Christmas tree which is lit in the Boston Common.

A collaboration born to pay homage to this deep bond between our two regions, From Nova Scotia With Love is an Abbey-style ale barrel-aged in Cape Breton’s own Glenora Whiskey barrels. Notes of vanilla bean, subtle smoke, sticky-toffee pudding and a lingering warmth from the whiskey, it’s complex and deeply aromatic.

From Nova Scotia With Love was brewed at both breweries, and each has released their version – Big Spruce in 650 ml bottles, Harpoon in 16 oz cans – in their respective markets. The Big Spruce version is available now at the brewery retail store and via online ordering for shipping across Canada.