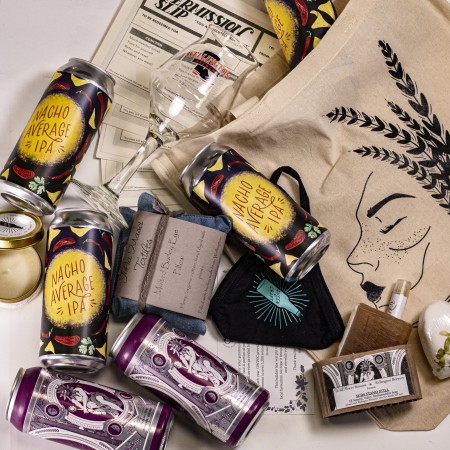 GUELPH, ON – Wellington Brewery and Queen of Craft – “a group of passionate women who use their diverse talents to teach others about beer” – have announced the release of two limited edition gift packs to support a worthy local charity.

The 2020 Queen of Craft Hug-In-A-Box gift packs are described as “curated gift packs [that] feature a selection of beer-inspired products created by local artisans. With the help of all makers involved who have helped provide products at cost, each box purchased will include a $15 donation to Guelph-Wellington Women In Crisis.”

The Cuddle Box includes “jewellery made by a local metalsmith, hand-made beer accessories and tasty treats,” with the Snuggle Box is focused on “beer-themed self-care products”.

Each pack also includes six 473 ml cans of beer, including four cans of the Wellington and Queen of Craft collaboration beer Nacho Average IPA (6% abv), which is described as follows:

Inspired by dreams of warm holiday vacations, this beer was made with Taco Farm’s house-made nacho chips adding a touch of corn sweetness to it’s light, refreshing body. Balanced perfectly with a subtle lime-zest citrus kick, this brew leaves a lingering touch of ancho chile pepper heat to leave your taste buds warm and refreshed, like a dip in the ocean after laying in the hot sun!

For more details and to purchase the gift packs for pick-up or delivery, see the product listing at the Wellington Brewery online store.