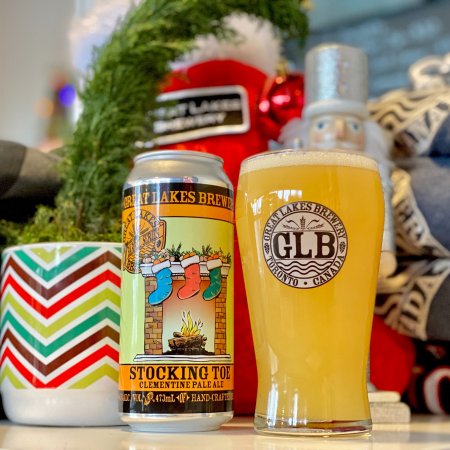 TORONTO, ON – Great Lakes Brewery has announced details of a (virtual) collaboration with The Wooly Pub, a bar and restaurant in Guelph where they have held an annual tap takeover over the Christmas season for the last eight years, but won’t be doing so this year for obvious reasons.

As a kid, waking up on Christmas morning was always exciting for Paul Randall, the bar manager at The Wooly, until he noticed his oddly shaped stocking hanging by the fireplace and soon realized it was full of clementines. Now each Christmas his excitement is reserved for this hazy clementine Pale Ale, not clementines in a stocking – growing up has its benefits.

Stocking Toe is being released this week alongside three other beers: BBB Imperial Black IPA (7.5% abv), a “big black beer” previously brewed for the Wooly tap takeovers; and two variants on Meet The Porters Porter (6.5% abv), one flavoured with Vanilla, and the other a Picante version with chipotle peppers, cinnamon and coffee.

All four beers will be available via the GLB online store today (December 17th) at 6:30 PM, and in the brewery retail store tomorrow morning.