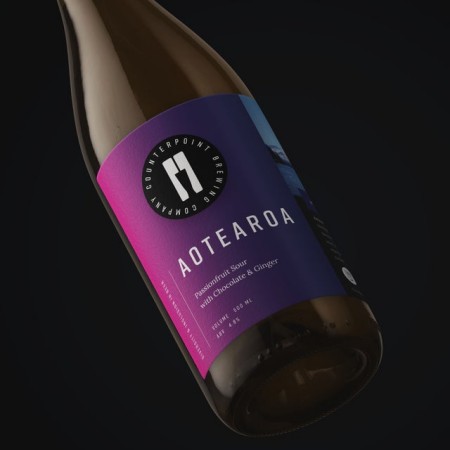 KITCHENER, ON – Counterpoint Brewing has announced the release of the second of a series of beers intended to “keep the message of how our friends in the BIPOC & LGBTQ2S+ communities augment our lives.”

The Diversity & Inclusion in Beer Series features limited edition releases created in collaboration with local chefs and artists, with proceeds going to a scholarship fund that the brewery is in the process of establishing.

Aotearoa (4.9% abv), is a sour ale created in collaboration with Lenore Johnson of LenJo Bakes, and is described as follows:

We have been digging LenJo’s amazing baked goods (and espressos!!) after discovering her shop on Ahrens St in Kitchener earlier this year. And although Lenore isn’t much of a beer lover herself, she was keen to create one with us. We taught her about beer, and she pushed us out of our comfort zone when it came to flavour combinations and ingredients. #teamworkmakesthedreamwork

Together, we brewed Aotearoa, the Māori name for New Zealand, translating to “Long White Cloud.” Lenore traveled to more than 20 European countries, exploring culture and food, before settling in NZ for two years, falling in love with the island nation and opening LenJo Bakes as a pop up. Aotearoa is a passionfruit sour with chocolate and ginger and is based on a couple of LenJo’s favourite desserts – pâte de fruits and chocolate. It’s an adventurous beer for your senses!

Aotearoa is available now at the Counterpoint retail store and online shop, and customers can also pre-order a passionfruit, chocolate and ginger flavoured Paris-Brest pastry that LenJo is making for pick-up at the brewery on December 23rd and 24th.