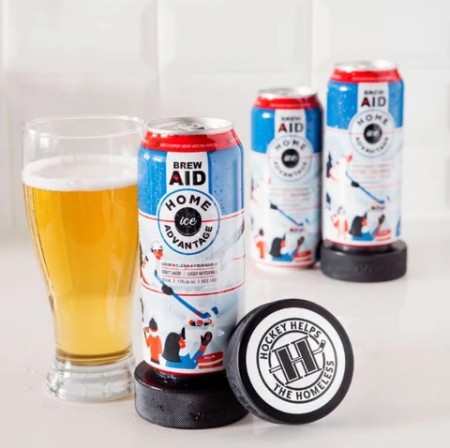 TORONTO, ON – Old Tomorrow Brewing has announced the launch of Brew Aid, a new series of beers in support of “selected charities to improve life in Ontario.”

The series is kicking off with Home Ice Advantage (4% abv), a “super crisp, clean lager” that was previously known as Light’er Up Canadian Craft Lager, and won a Silver medal in the Light Lager category at the 2018 Canadian Brewing Awards.

Partial proceeds from the sales of Home Ice Advantage will be donated to Hockey Helps the Homeless, a charity that works through local agencies across Canada to provide immediate assistance to those experiencing homelessness.

“We’re a small company but have a big heart and we are constantly looking for ways to contribute,” said Old Tomorrow President Ian Macdonald in a statement. “The pandemic has made our support of charitable events impossible so we pivoted and created the Brew Aid charity series.”

Home Ice Advantage is available now at 200 LCBO locations throughout Ontario. A second Brew Aid beer supporting a different charity is planned to follow in spring 2021.