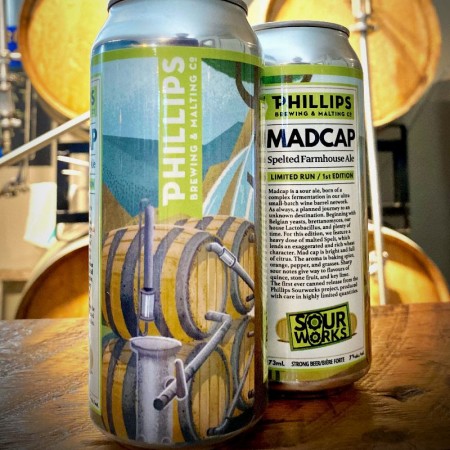 VICTORIA, BC – Phillips Brewing has announced the release of the first beer from its Sour Works Barrel Reactor.

The new project has the following explanation:

We took inspiration from the classic Burton Union System which is a traditional method of fermentation that recirculates the yeast from batch to batch in oak barrels. We then combined this classic technique with a modern bioreactor approach that encourages a diversity of flavour enhancing microbes to take up residence in our system. The final result was the creation of this first ever Sour Works Barrel Reactor comprised of four modified oak wine barrels that form one incredible tower of sour!

Madcap Spelted Farmhouse Ale (7% abv) is the first Sour Works release, and is described as follows:

Our Madcap Spelted Farmhouse Ale began with Belgian yeasts, brettanomyces, our house Lactobacillus culture and plenty of time. Featuring a heavy dose of malted Spelt to add an exaggerated and rich wheat character, this small batch brew was recirculated through this custom made interconnected barrel system during fermentation. This stage of brewing is perfect for the beer to gain flavour complexity from the diverse array of microbes and yeast that have thrived in this unique barrel reactor system. Our Madcap Spelted Farmhouse Ale has been aging for a year soaking up all this flavour from the Barrel Reactor, [and] is bright and full of citrus with softer aromas of baking spice, orange, pepper and grasses. The sharp sour notes give way to flavours of quince, stone fruit and key lime.