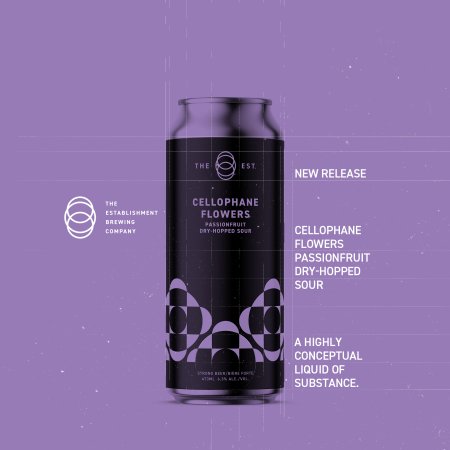 CALGARY, AB – The Establishment Brewing Company has announced the release of its latest limited edition sour ale inspired by a psychedelic classic.

This beer isn’t unlike Kaleidoscope Eyes in that it’s a passionfruit sour, but it’s not quite like it either since we added a healthy helping of hops to the mix. We used Azacca hops, these flowers of yellow and green grow so incredibly high throughout America. They’re partially to praise for the tropical taste that makes everyone smile as they drift by. Since more flavours combine in this brew’s bouquet, the trick was in a perfectly balanced arrangement between the sour, fruity, and hoppy elements. We achieved this through post-fermentation hops to maintain the flavour and aroma of the Azacca without inviting the bitterness to compete with the fruit’s tart torridity. More approachable than Kaleidoscope Eyes in ABV, sure – but this potion pulls no punches when it comes to flavour.

Cellophane Flowers is available now in 473 ml cans at the Establishment retail shop and online store while supplies last.