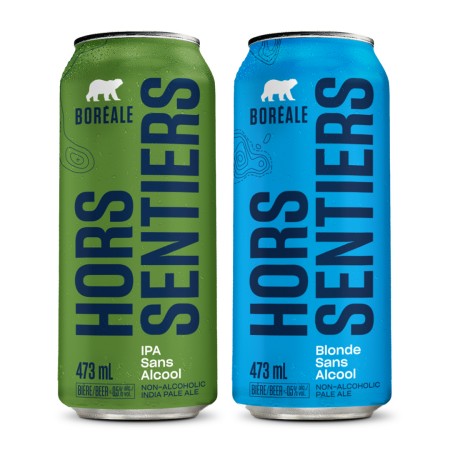 BLAINVILLE, QC – Les Brasseurs du Nord – best known for its Boréale brand – has announced the launch of a new line of non-alcoholic beers.

Hors Sentiers – French for “Off Trails” – features beers “containing 100% natural ingredients [that] are produced through an innovative brewing method that preserves the good taste of a traditional beer, without the alcohol.”

The label made its debut in late December with the release of Hors Sentiers Blonde (0.5% abv) and Hors Sentiers IPA (0.5% abv), both featuring less than 80 calories per 473 ml can.

“Consumer needs are constantly evolving and it was important for us to add a non-alcoholic line of beers to our existing product range,” said Sébastien Paradis, CEO of Les Brasseurs du Nord, in a statement. “Hors Sentiers beers have been developed for a wide range of consumers who want to enjoy the taste of a craft beer, anywhere, at any time.”

Hors Sentiers Blonde and IPA are available now at grocery and convenience stores throughout Québec.