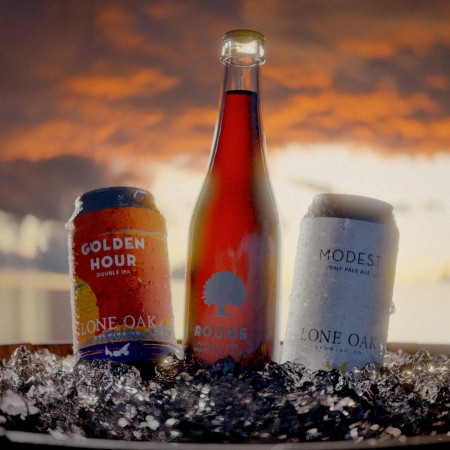 Brewed with Island malt, this DIPA is a bit on the wild side. Fermented 100% with brettanomyces in oak, and heavily hopped with El Dorado, Simcoe, Centennial, and Mosaic. Copper in colour, expect notes of stone fruit, candied pineapple, and underlying redwine character. A very easy drinking double IPA that is certain to warm up your soul.

Modest is Lone Oak’s smallest beer to date. Weighing in at a mere 3.5% but loaded with flavour. A complex malt bill of PEI Pilsner malt, flaked wheat, rice, and oats yields a light bodied pale ale that is balanced with a moderate bitterness and intense hop character.

This complex farmhouse ale is brewed with a mix of all PEI malt and aged on local Lucie Kuhlmann grapes from Rollo Bay PEI. Deep red in color Rouge is a tannic, balanced, foeder aged farmhouse ale that imparts a juicy wine-like characteristic blended with the classic acidity and brettanomyces flavours derived from our house culture.

All three anniversary beers are available now at the Lone Oak retail store and online shop while supplies last.