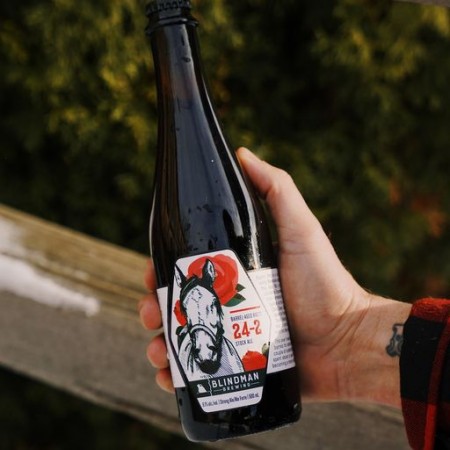 LACOMBE, AB – Blindman Brewing has announced a returning release in its Bières de Coupage series of barrel-fermented and blended beers.

Barrel-Aged Brett 24-2 Stock Ale (8.1% abv) is back in its 2nd annual vintage, which is described as follows:

We take one of our favourite releases of the year – 24-2 Stock Ale (a strong British style; the 2021 version just released in January) – find a home for some of it in wood, pitch a blend of Brett strains, and let it age for a number of months. This year’s release is 2020’s 24-2 Stock Ale aged in Four Roses bourbon barrels that previously held our Imperial Stout. The result is a refined, distinguished ale with charred oak, a whiff of bourbon, and a beautifully tart balance.

Barrel-Aged Brett 24-2 Stock Ale is available now at the Blindman taproom and online store, and select beer retailers throughout Alberta.