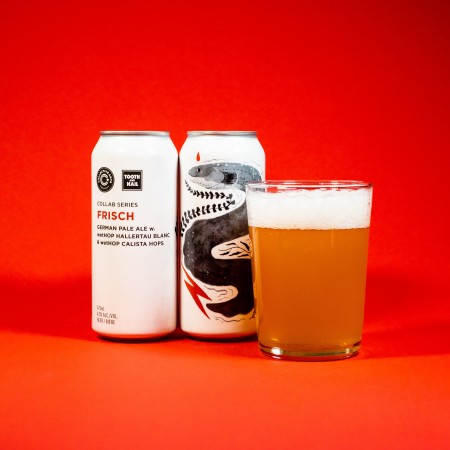 HAMILTON, ON – Collective Arts Brewing has announced the return of a collaborative beer with Ottawa’s Tooth & Nail Brewing.

This collaboration with Tooth and Nail is a re-brew of a unique German Pale Ale we originally made at their place in the nation’s capital. Named “Frisch” (German for “Fresh”), this beer uses WetHOP™ Hallertau Blanc and WetHOP™ Callista hops from our friends at Brew Culture, the only ones in Canada who offer these unique fresh German hops. WetHOP™ is a preservation technology for freshly harvested hops that allows us in North America to use German hops and retain their freshly harvested ‘wet hop’ qualities. Expect a lovely fresh green hop character, with the subtle notes of citrus, stone fruit, white wine and fresh cut grass.

Frisch is available now at the Collective Arts online shop and brewery retail stores in Hamilton and Toronto.