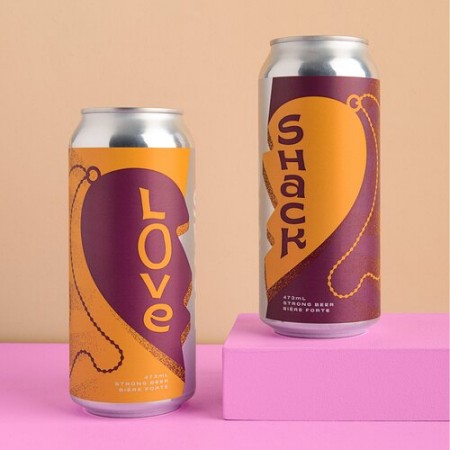 CALGARY, AB – Cabin Brewing and Eighty-Eight Brewing have announced the release of a new collaboration that is all about “celebrating our mutual love – for each other, and for tasty beer.”

The talented brew teams at Cabin and ’88 built the recipe for Love Shack together, then each brewed their own version. We started with a wonderfully hazy, super soft malt bill, added a load of passionfruit as big as a whale and then dry-hopped the living bejeebus out of it with Galaxy, Vic Secret, Cryo Mosaic and Cryo Sabro hops. Think of it as tropical aromatherapy, with a citrus chaser, mixed with a delightfully tart little twist of passionfruit. Juicy? Yes. Tasty? HECK YES!

The announcement also notes that “while it’s the same recipe and same ingredients, each beer is slightly different – so be sure to try both and see what tasty differences you may find!”

Love Shack is available now at Cabin and Eighty-Eight, including their respective online stores, with each brewery offering 4-packs of its own version, as well as a mixed 4-pack with two cans of each.