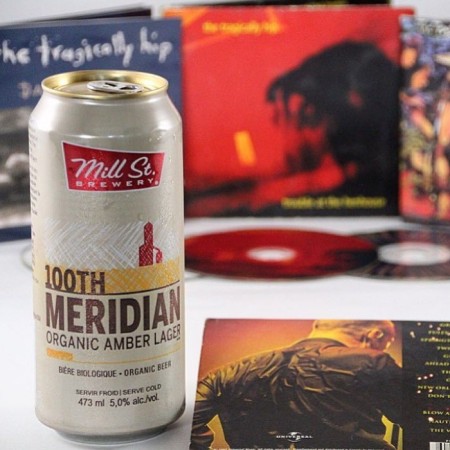 TORONTO, ON – The surviving members of The Tragically Hip have filed a lawsuit against Mill Street Brewery over its 100th Meridian Amber Lager.

In a statement of claim filed yesterday, the group alleges that Mill Street has attempted to “ride on the coat tails of one of the most beloved bands in Canadian music history by marketing its beer with reference to The Tragically Hip and one of its many quintessentially Canadian chart-topping tracks, ‘At the Hundredth Meridian.’”

When released in 2014, 100th Meridian Amber Lager was described as being made with “organic barley malt, hops and yeast [that] come from west of the 100th Meridian – thus the name.”

While no mention of the band or the song were made at the time of its launch, the beer has subsequently been promoted on social media with images related to the Tragically Hip, including an Instagram post on the evening of the group’s final concert with featured a can pictured with several Tragically Hip CDs.

You know we have always been all about our fans. That’s why we make sure that everything we release, whether it’s music, merchandise, or beverages, is approved by us and made for you. Mill Street’s 100th Meridian beer is neither. We tried to sort it out with Mill Street for months but were unsuccessful. They didn’t take us seriously and were frankly disrespectful. We have been around for a long time, and have always been able to work things like this out without a lawsuit. Unfortunately, not this time. We took this step to clear up any confusion once and for all.

Demands in the lawsuit include a minimum of $500,000 in “punitive, aggravated and exemplary damages”; additional damages for copyright infringement; a public statement from Mill Street to clarify that the beer is not associated with the band; and a removal of all social media posts that reference or suggest an association with the band.

Mill Street Brewery and its parent company Anheuser-Busch InBev have yet to publicly respond to the lawsuit.