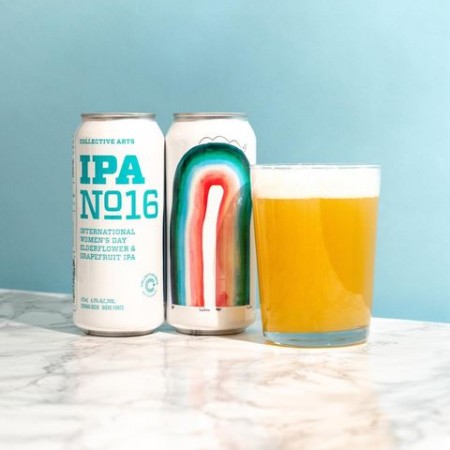 HAMILTON, ON – Collective Arts Brewing has announced the latest release in its ongoing numbered series of limited edition IPAs, with this one being a special brew in honour of International Women’s Day.

IPA No. 16 (6.3% abv) was brewed with elderflower and grapefruit, and is described as follows:

IPA No. 16 is a refreshing blend of juicy and floral. The nose is fragrant while retaining a strong backbone of hoppy aromatics. The complex hop blend was designed by the Pink Boots Society, an organization created to assist, inspire, and encourage women in the beer Industry, and lends a subtle floral sweetness. The beer finishes with an effervescent pop of pithy grapefruit for an elevated IPA with a distinct and striking flavour combination.

IPA No. 16 is available now at the Collective Arts retail stores in Hamilton and Toronto, and via the brewery online shop, with distribution to beer retailers in markets where Collective Arts beers are available to follow soon. Proceeds will be donated to the Canadian Women’s Foundation and American Women Artists.