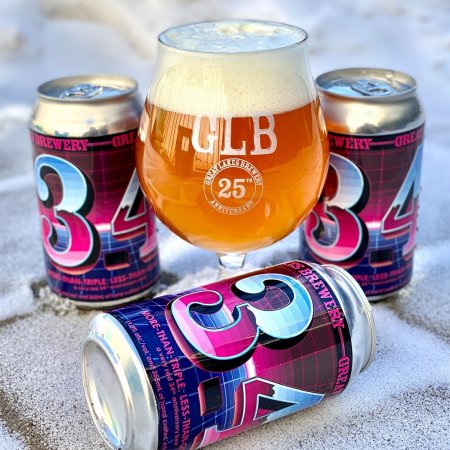 TORONTO, ON – Great Lakes Brewery has announced details of a new beer being released to mark its 34th anniversary.

3.4 IPA (11% abv) started out as a homage to Russian River’s classic Pliny the Younger Triple IPA, and grew from there, as described by brewer Mike Lackey:

When we started to plan what style of beer to brew for our upcoming 34th anniversary two camps quickly emerged. The conservative faction lobbied for a good old fashioned Triple IPA while a new group of free thinkers decried, “Why stop at Triple when we could make a Quadruple!” Well, needless to say – things got heated. The fabric of the brewery ripped at the seams and many friendships were seemingly lost, forever. Alas, someone ultimately suggested we do a hybrid Triple/Quad and everything was fine again. The 3/4 IPA happily worked for 34th anniversary.

We used a mix of old school and new school hops. We started with Simcoe and Columbus which was likely what Russian River was using back in 2010. Then the Quadruple IPA generation took over and we added Idaho 7 and Talus. Triple hopped (and a half of course). It’s not hazy – it’s very west coast. The aroma is huge wallop of tropical fruits and cannabis. The flavour follows with a massive hit of hops mid-palate, ending with a dry and pleasantly bitter finish.

3.4 IPA will be available to order today (February 11th) at 6:30 PM via the Great Lakes online store, and will be in the brewery retail shop tomorrow starting at 11:00 AM, along with several other new and returning beers including Zwei Zwegen Doppelbock (8.5% abv), Body Dubbel Belgian Ale (7% abv), and Audrey Hopburn Belgian IPA (6.2% abv).

The official celebration of GLB’s anniversary will be taking place tomorrow (February 12th), with the brewery and friends “sharing archival material (images, videos, audio) and telling stories from our 34 years in Ontario brewing” via social media. To follow along, check out the #GLBDAY hashtag on Twitter, Facebook and Instagram.